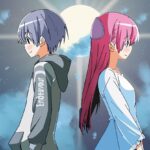 TONIKAKU CAWAII (Fly Me to the Moon) (Japanese: トニカクカワイイ, Hepburn: Tonikaku Kawaii, lit. “Adorable Anyways” or “Cute, No Matter What”), also known outside Japan as Tonikawa: Over the Moon for You, is a Japanese manga series written and illustrated by Kenjiro Hata. It has been serialized in Shogakukan’s Weekly Shōnen Sunday since February 2018. The story surrounds the teen genius Nasa Yuzaki and his developing relationship with his new wife, Tsukasa, who saves him in a car accident at the beginning of the story.